You are here: Home / News

Fears of higher rates have slammed stocks in the housing sector this year.

The nationwide average 30-year mortgage jumped to a seven-year high of 4.61% in May from a low of 3.78% last year. The Fed has signaled more rate hikes on the way and the market is pricing in a 44% chance the FOMC raises rates three more times in 2018.

Investors have fled anything housing-related, sending the iShares U.S. Home Construction ETF (NYSE: ITB) plunging 12% since the beginning of the year.

While rates are likely to rise further, the market is missing one very important number. This one stat could support higher home prices and activity in the sector.

Share prices have fallen into value-territory and could snap back when investors realize that higher rates aren’t slowing sales for housing stocks.

The One Number That Could Start Housing Stocks Building Higher
The selloff in housing-related stocks this year has been brutal. The Home Construction ETF started falling just a week before the January meeting of the Fed and has erased nearly 16% of its value.

And it’s not just homebuilders feeling the pain, real estate REITs are down broadly, with the Vanguard REIT ETF (NYSE: VNQ) falling 8.3% so far in 2018.

However, one overlooked statistic appears to support higher prices and activity in the sector for years to come.

The National Association of Realtors (NAR) reported just 1.67 million existing homes for sale at the end of the first quarter. That’s down 7.2% from the same period last year and Glenn Kelman, CEO of real estate firm Redfin, was quoted in an interview with CNBC saying, “[Inventory] has never declined faster. It’s freaking us out.”

The Monthly Supply of Housing, a measure reported by the Federal Reserve of houses for sale versus purchases, dropped to 5.2 months in March. That’s 15% lower than the average, going back to 1963.

There are many theories as to why inventory of homes for sale is so low, from rising prices making housing unaffordable to reluctant baby boomers. Trulia used statistical analysis in a study last year and found new home construction, or lack of it, has been the biggest factor. In fact, home building as a factor in inventory was almost four times stronger than any other factor.

Not only is the supply of homes for sale falling but demand may actually be more robust than the market assumes in a rising rate environment.

According to the University of Michigan consumer sentiment survey, 39% of respondents said home selling conditions were optimal, the highest level since 1992, and 16% (most since 1980) said they don’t see prices coming down.

3 Housing-Related Industries That Win On Low Inventory
The most obvious winners in all this are homebuilders and home improvement retailers. The lack of inventory in existing homes for sale mean homebuilders can increase prices without losing potential buyers.

The NAR also reported recently that the median single-family home price is up 5.7% from the first quarter 2017. That year-over-year increase is higher than the increase reported in the fourth quarter.

PulteGroup (NYSE: PHM) is one of the largest homebuilders in the United States, with operations in 25 states and a strong focus in the Southeast. Single-family homes make up the bulk of sales (88% of units) with financing through the company’s owned subsidiary.

Nearly all the homebuilders reported surprisingly strong first-quarter results against higher rates, but PulteGroup blew through analyst expectations with a 21% rise in year-over-year revenue and a 10% increase in home deliveries. New contracts signed during the quarter were also up 12% and the company reported a backlog of 11,245 homes, representing more than two quarters’ worth of deliveries.

Management has been shifting to margin improvement ahead of rising rates, increasing operational profitability by 2.7% during the quarter. Earnings are expected higher by 61% this year to $3.32 per share on stronger revenue and profitability.

The Home Depot (NYSE: HD) could benefit from both an increase in home building and people remodeling their homes instead of selling. The world’s largest home improvement retailer saw its shares slide after a disappointing first-quarter report due to a late start to the spring building season.

What Wall Street missed is that management increased its full-year sales guidance, leading me to believe that the missed first-quarter sales will be made up and second-quarter results could surprise higher.

The company has been one of the few retailers to withstand the shift online and may even benefit as competitors like Sears close stores. Earnings are expected higher by 27% this year to $9.45 per share for a forward price of 19.8 times earnings.

Apartment REITs have also started the year on a down-note with higher rates compounding fears of over-supply in apartment building in the years after the housing bubble burst.

The boom in building could quickly turn to a deficit though. New construction in multi-family units fell 13% in March, according to the Commerce Department, and permits for future building fell 6% from a year earlier.

As prices continue to rise for single-family homes and lack of homes for sale give buyers fewer options, apartment rents could jump higher.

AvalonBay Communities (NYSE: AVB) owns and operates more than 285 apartment communities in 10 states, almost exclusively in large markets along the East and West coasts. Funds from Operations (FFO) increased 6.4% in the first quarter from the same period last year on strength in the West Coast business, and the company was able to keep occupancy steady even after a 2.5% increase in average rental rates.

Avalon Bay completed three communities in the first quarter and has another 18 in its developmental pipeline to support growth. Shares pay a 3.5% yield, which still gives the company ample cash to rely less on debt and a capital raise.

Risks To Consider: Rising rates could continue to drag on investor sentiment for housing-related stocks even as macro-factors support stronger activity.

Action To Take: Look to beaten-down housing stocks ahead of a potential rebound as historically-low supply supports home prices and activity.

Home builder sentiment slipped some in a new April survey by the National Association of Home Builders and Wells Fargo, but industry confidence remains at healthy levels.

The NAHB’s HMI index came in at 68, down three points from March’s 11-year high. Industry sentiment is strong if the index is more than 50.

Home builder stocks are up in Monday morning moves. That includes gains for Scottsdale-based Meritage Homes (NYSE: MTH). The Arizona builder is up 1.05 percent at $38.35, according to Google Finance.

Meritage is up 10.2 percent so far this year. 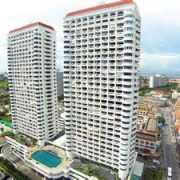 How to value Fractional Interest in Real Estate ~ Partitioning costs.
“How do I divide or value property that is owned as Tenants in common Imagine that you own a property or a parcel of land with another person – a sibling, a friend, or a spouse. But then your interests diverge; you and that person have different ideas about what to do with the property; in particular, how to use, improve, or dispose of it.
Say, for example, one of you wants to build or expand a house, the other wants to start a farm. Or that one of you wants to sell the property, the other wants to maintain it for generations. Perhaps one of you wants to rent it out, the other wants to leave it unoccupied until some future date when it will be sold. Your efforts to negotiate or compromise are getting you nowhere; you’re stalemated.
A partition, or division, of property can be arranged on a voluntary basis if all owners agree to it. However, if they don’t agree, a judge can order a partition of the property based on one owner’s request. If done gracefully and with agreement, it can result in a more efficient splitting of the property where all of the former owners are happier owning their own portion.” This explanation is provided by Brian Farkas, attorney at law. Mr. Farkas is an associate attorney with Goetz Fitzpatrick LLC in New York.
The interesting valuation

question arises on how to value fractional interest of real estate. Believe it or not, the IRS accepts partitioning costs in order to calculate discounts for valuation purposes for Real Estate valuations as well.   This can be an acceptable way to develop a discount for fractional interest.  Something well worth understanding for such as issues as “Tenants in common”.    Definitely worth knowing.
https://www.johnsonappraisal.com/wp-content/uploads/2016/08/th-1.jpg 225 300 Chuck Johnson https://www.johnsonappraisal.com/wp-content/uploads/2015/07/logo.png Chuck Johnson2016-08-20 02:23:252016-08-20 02:23:25What is an acceptable discount for fractional interest ~ Partioning

We are pleased to announce that for the second year in a row, Johnson Appraisal Group was voted among the top 10 Appraisal Firms in Arizona by, “Ranking Arizona.” The Best of Arizona Businesses.  Thank you to our clients, colleges and friends for voting for us.

We are pleased to announce that Chuck Johnson was recently elected as a, Professional Member of The Royal Institution of Chartered Surveyors. As a member of the RICS, Chuck is now a fully designated member of this prestigious professional international valuation organization.

“The RICS headquarters is in London with its main support functions in Coventry. There are regional offices in the United Kingdom, across mainland Europe, in China, Hong Kong, Singapore, Australia, the Middle East, Sub-Saharan Africa, North America and Brazil.

In 2015, there were RICS-qualified professionals in more than 140 countries. The total number of those accredited worldwide was 120,000, plus student membership of 81,000. The majority of accredited individuals or members are still based in the United Kingdom with large numbers also in mainland Europe, Australia and Hong Kong. There is now a strong growth globally, and particularly in China, India and the Americas.

The RICS has close links with many national surveying institutions and is a founding member association of the International Federation of Surveyors (FIG). Within the RICS the primary areas of practice represented at FIG are geomatics (land and hydrographic survey), environment, planning, construction and valuation.