You are here: Home / Blog

We are pleased to announce that for the second year in a row, Johnson Appraisal Group was voted among the top 10 Appraisal Firms in Arizona by, “Ranking Arizona.” The Best of Arizona Businesses.  Thank you to our clients, colleges and friends for voting for us.

We are pleased to announce that Chuck Johnson was recently elected as a, Professional Member of The Royal Institution of Chartered Surveyors. As a member of the RICS, Chuck is now a fully designated member of this prestigious professional international valuation organization.

“The RICS headquarters is in London with its main support functions in Coventry. There are regional offices in the United Kingdom, across mainland Europe, in China, Hong Kong, Singapore, Australia, the Middle East, Sub-Saharan Africa, North America and Brazil.

In 2015, there were RICS-qualified professionals in more than 140 countries. The total number of those accredited worldwide was 120,000, plus student membership of 81,000. The majority of accredited individuals or members are still based in the United Kingdom with large numbers also in mainland Europe, Australia and Hong Kong. There is now a strong growth globally, and particularly in China, India and the Americas.

The RICS has close links with many national surveying institutions and is a founding member association of the International Federation of Surveyors (FIG). Within the RICS the primary areas of practice represented at FIG are geomatics (land and hydrographic survey), environment, planning, construction and valuation. 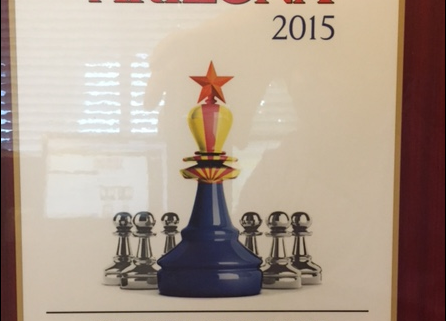 Johnson Appraisal Group was recognized earlier this month and has been ranked in the top ten of all appraisal firms throughout the state of Arizona. The ranking was done by The Best of Arizona Business for 2015 which is part of Arizona BIG Media, who has an array of local business, lifestyle and online publications. We were humbled by the recognition and appreciate everyone who took the time to vote for Johnson Appraisal Group.

Ranked Top 10 Appraisers in the State Of Arizona

This award speaks to our commitment to our industry, our community and our integrity. This profession requires an abundance of time, continued training & education, time away from home, long hours, amongst other variables and we are truly thankful to be recognized for our commitment. We will continue to strive for excellence in all aspects of our business, which we hope will resonate with each of our clients, customers and colleagues.

Ranking Arizona is based entirely on voter’s opinions. Individuals vote based on quality of product, service and who they would recommend doing business with. The responses are then assembled and ”ranked” according to their total number of votes. webhosting info . Ranking Arizona Magazine is published annually and consists of controlled mailed distribution to primarily upper management executives, presidents, principals and small business owners throughout the Arizona Community.

If you have an opportunity, please take the time to vote not only for the Johnson Appraisal Group, but all of your other favorite local businesses throughout Arizona, you can do that by clicking here.